Setting up your PolyJet printers for GrabCAD Print

Please refer to the table below. For the J5-Series, Scenario 1 is used because the Job Manager and the Embedded Software are updated in tandem. For J7-Series and J8-Series setup, it is recommended to use Scenario 1. Having the GrabCAD PolyJet Job Manager installed on the Printer PC increases speed and reliability of the connection. However, if your IT department restricts which computers are allowed to be connected to the LAN, you can use Scenarios 2 or 4. For Connex3, Objet30, and Objet1000 Plus Setup, Scenarios 2 and 3 are recommended, because the Host PC is more powerful and can handle large jobs. GrabCAD Print should never be installed on the Printer PC.

It is recommended to upgrade the Embedded Software before setting up GrabCAD Print.

First, check your existing Embedded Software version with Help > About.

You should NOT continue with the upgrade if:

2
Make a backup of the existing folder.
3
Install the new Embedded Software.

If you are setting up a new printer, you can skip this step. If you are currently using the legacy PolyJet software, called Objet Studio or PolyJet Studio, you do not need to uninstall it in order to use GrabCAD Print, but you do need to manually stop the Job Manager associated with it.

For Connex3, Objet30, and Objet1000 printers, there should be a shortcut on the desktop of the Host PC called "Stop Job Manager." Double click on this shortcut to stop the Job Manager associated with Objet Studio.

For J7-Series and J8-Series printers, the process is a bit different. The GrabCAD PolyJet Job Manager automatically closes the old job manager associated with PolyJet Studio, but a service called the Watch Dog will attempt to restart it. Therefore, you need to manually stop the Watch Dog process before installing the GrabCAD PolyJet Job Manager. On the Host PC, open the Task Manager and stop the service called JobManager.WatchDog. This may be running on the Printer PC, if your J7-Series or J8-Series was installed without a Host PC.

Get the IP addresses of the computers in the setup 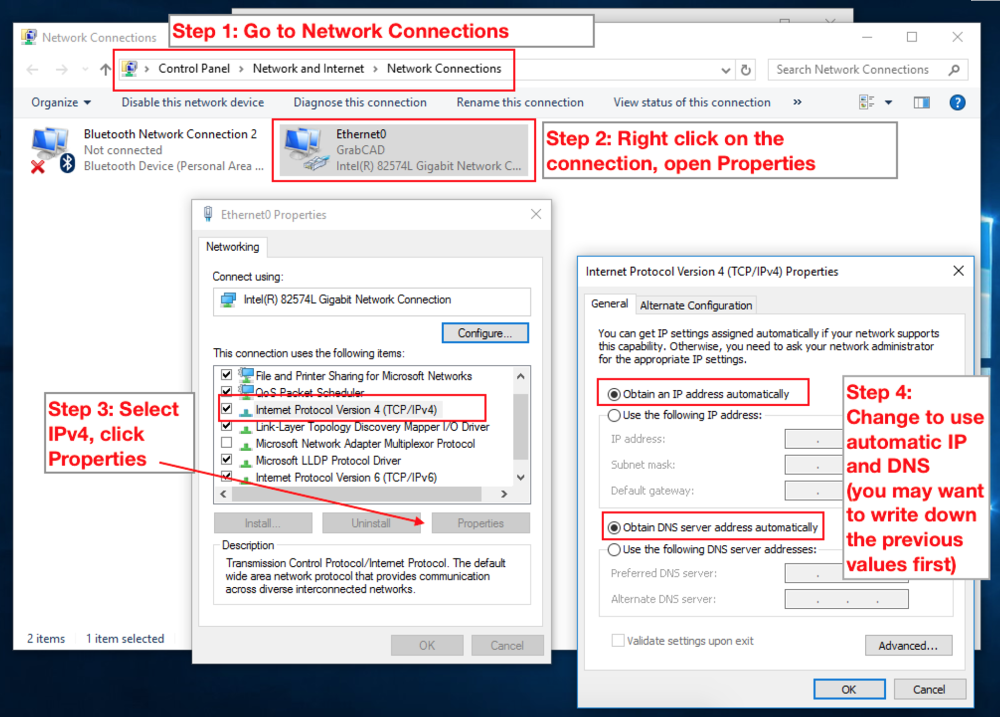 Now you need to find out the IP address you just made. To do that, hit the Start button, type cmd to find the Command Prompt program and run it, then type ipconfig /all and hit enter. The IP address will be labelled "IPv4 address..."

Scenario 2: On both the Host and the Printer PCs, hit the Start button, type cmd to find the Command Prompt program and run it, then type ipconfig /all and hit enter. It's most likely that the Host PC has two network cards, so it should have two IP addresses listed. One is 10.0.0.2,  and the other is what you will use for Step 5.

Scenarios 3 and 4: Most likely the IP address of the Printer PC is 10.0.0.1 and the Host PC is 10.0.0.2. To double check this on each PC, hit the Start button, type cmd to find the Command Prompt program and run it, then type ipconfig /all and hit enter. 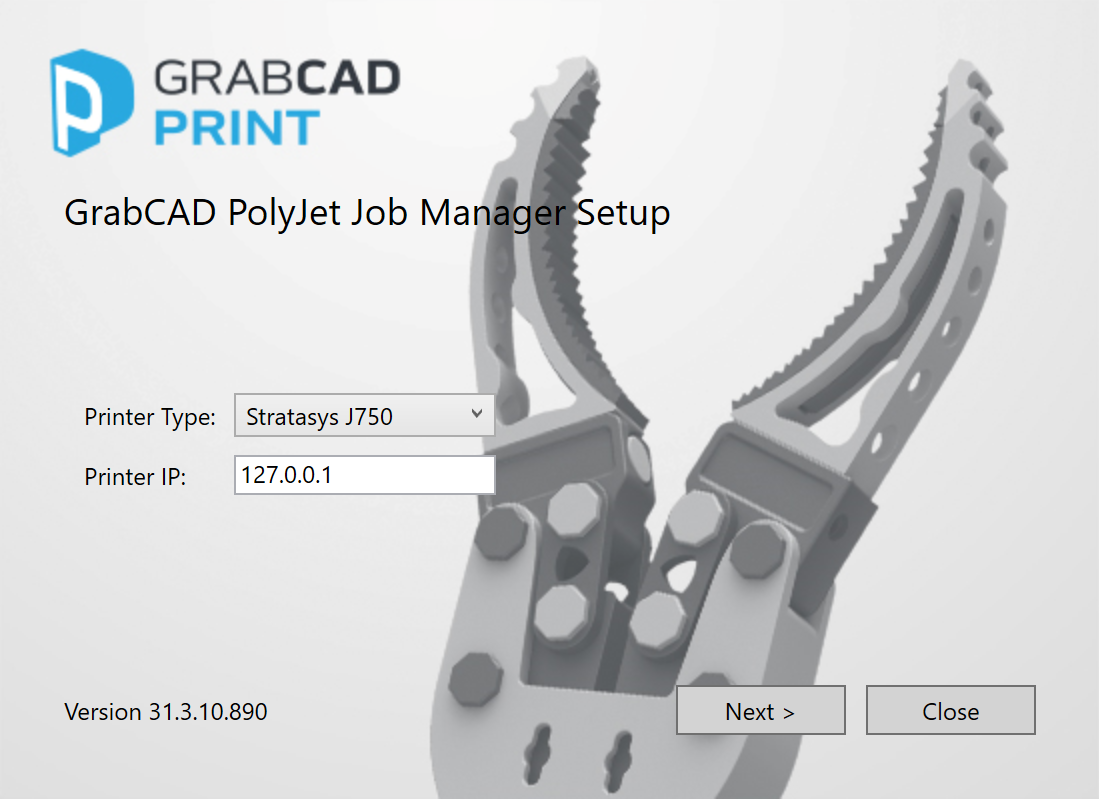 Scenarios 2 and 3: Run the installer on the Host PC and enter the Printer PC's IP address that you got in Step 3, which is most likely 10.0.0.1. If this computer does not have internet access, you will need to download the installer elsewhere and transfer to the Host PC via the network or a USB drive.

Add the printer in GrabCAD Print and start printing!

In GrabCAD Print, open the printer panel and click "Add." 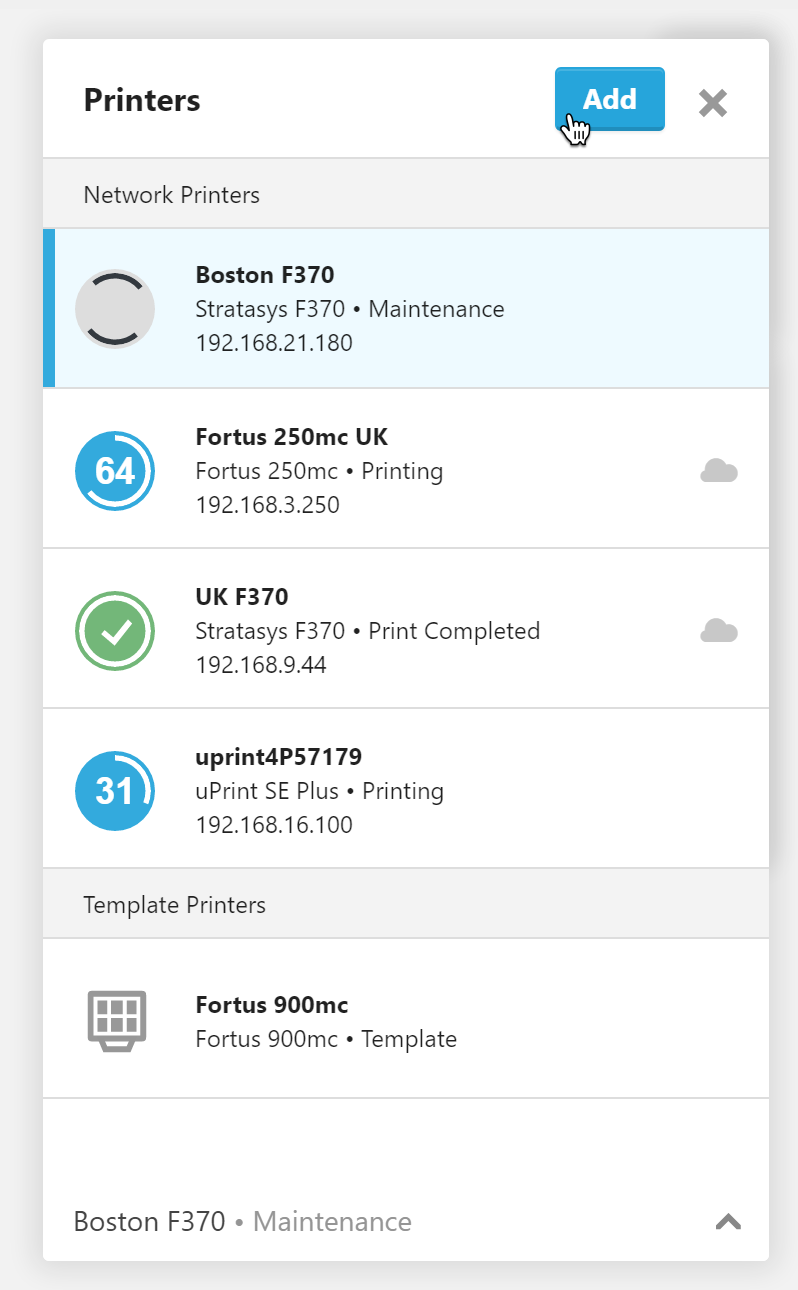 All Scenarios: Click "Add a network printer" and select the printer. If you do not see the printer listed, use the IP addresses as follows:

Scenarios 1 and 4: Enter the IP address of the Printer PC you got in step 3.

Scenario 2: Enter the IP address of the Host PC you got in step 3.

When the Job Manager is out of date you will not be able to connect to the printer, and GrabCAD Print will automatically switch to the template instead.

When you go to the printer panel, you will see this message: 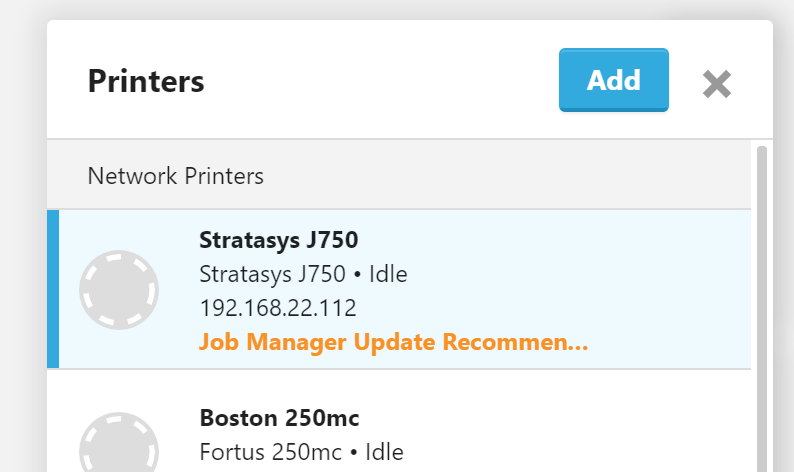 To update the Job Manager open the Printer Panel and click on the printer, then click the Settings button.

You may need to restart GrabCAD Print at the end of the update.

These are the programs that run in addition to those related to GrabCAD Print:

Switching back to PolyJet Studio or Objet Studio

You do not need to uninstall anything to start using PolyJet Studio or Objet Studio again, you just need to switch Job Manager watch dog processes mentioned in Step 2.

For the Connex3, Objet30, and Objet1000 Plus, you also need to undo Step 3 and restore the IP addresses to their previous values.

Next step: Connect your printers or Take a quick tour